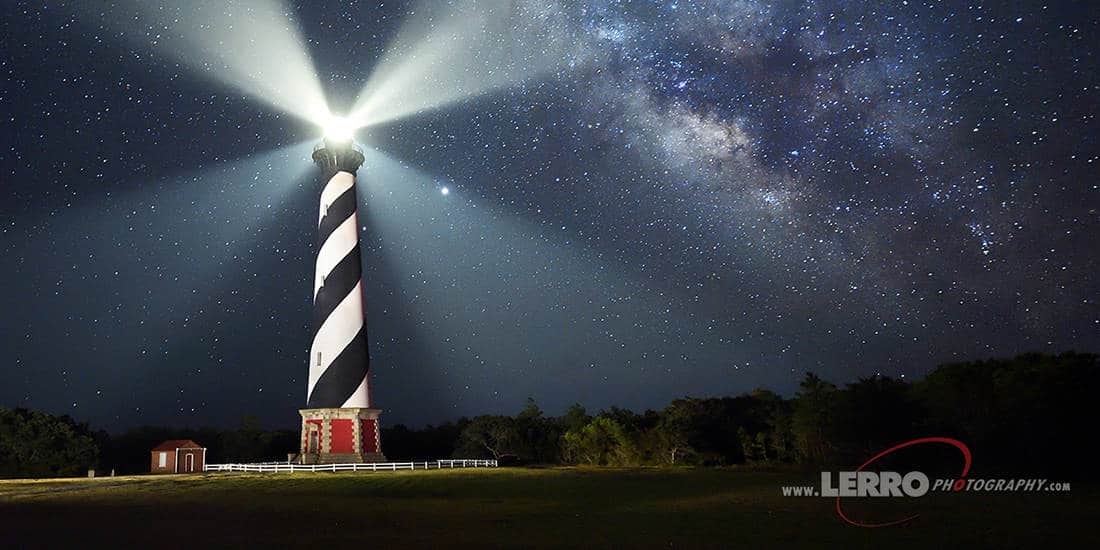 The waters off the shore of the Outer Banks of North Carolina are known as the “Graveyard of the Atlantic,” and for good reason — more than 1,000 ships have sunk in these waters since recordkeeping began in 1526. Because of this, a cluster of our country’s tallest lighthouses protects these shores.

Join Lerro Photography as we photograph some of the most famous lighthouses in the country. During the workshop, participants will learn how to photograph these scenes under several different lighting situations, including sunrise, sunset, and nighttime. The skies will be near moonless, so there will be plenty of time for us to photograph the lighthouses with the Milky Way. We’ll also have artificial lighting available to help light the towers themselves.

The Outer Banks Lighthouse trip will be broken into two parts:

In addition to the lighthouses, we will photograph a couple of other local maritime locations.

Cape Lookout Lighthouse resides on the isolated island of Cape Lookout and has the unique distinction of being the only lighthouse in the U.S. with a diamond-pattern paint scheme. For our photo shoot, the participants will travel by ferry from Harkers Island to Cape Lookout, where we will camp and photograph the lighthouse during our two-night stay.  During the night, we will not only photograph the lighthouse but enjoy a bonfire on the beach as well. The ferry will bring us back to the mainland when our workshop is over.

Important: There isn’t a bridge to Cape Lookout. To access the island, you must take a ferry.  You have two options: You can take a passenger ferry and hike to the lighthouse and campsite or you can take a small vehicle ferry and drive your 4×4 SUV 12 miles on the sand road to the campsite. The primitive camping site is on the beach and is within 1/3 of a mile from the lighthouse. Bathrooms and drinking water are available near the lighthouse. You must bring your own food and camping equipment.

— Transportation and Hotel Accommodations are not included in the ticket price—

Car transportation must be done on your own. A GPS is required, especially if you plan on meeting the group on your own. Google map links to all lighthouses will be emailed to the participants.

Camping: You must bring your own camping equipment to participate in the Cape Lookout part of the trip. Please inquire for more details.

Bank checks or money orders made payable to:

Checks are not subject to credit card convenience charge.

In the envelope with your check, please include a letter with your name, email address, phone number and what you are planning on attending.

Credit Card sales are subject to a 4% convenience charge which is not refundable. The 4% has been added to the price with the button below.
Checks are not subject to this charge.