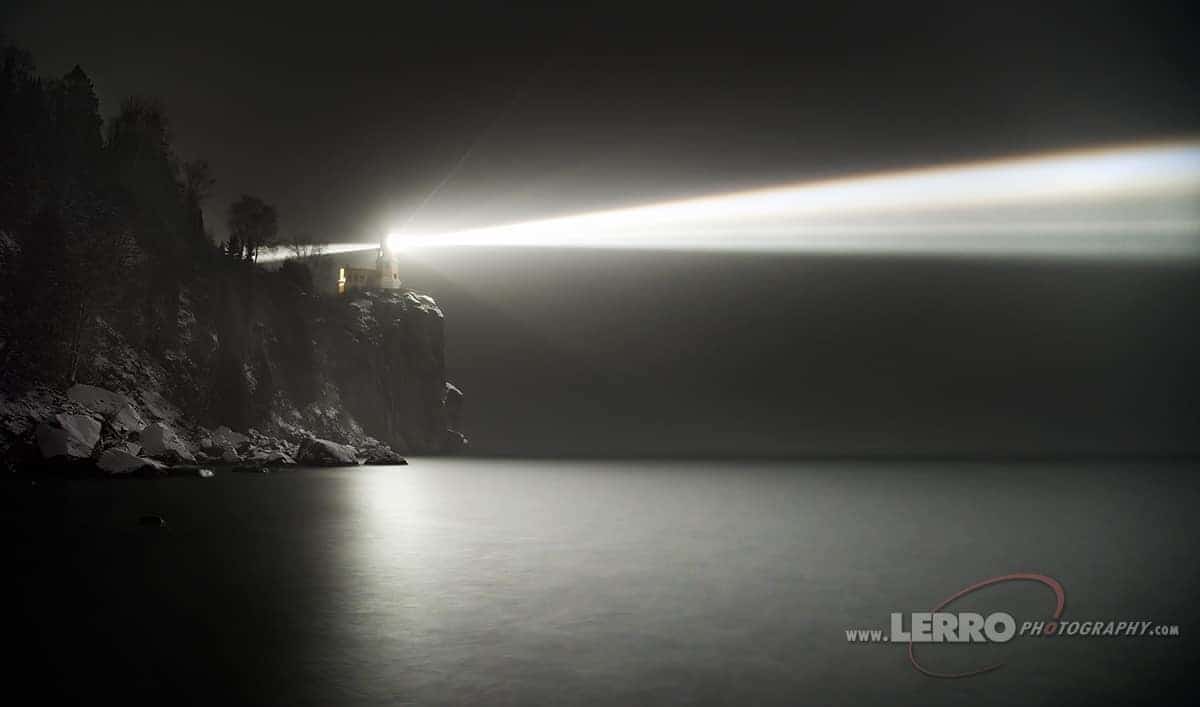 To mark the anniversary of the sinking of the S.S. Edmund Fitzgerald in Lake Superior, the Split Rock Lighthouse illuminates its 3rd order Fresnel lens for about two hours every year. On average, the lighthouse only turns its light on two to three times a year, making it a rare occurrence. I’ve always wanted to attend this event, but personal scheduling never allowed. This year, however, I made it a point to go.

In years past, I had tried to schedule a photo shoot and get the lens lit for just our photo group but, unfortunately, it was never able to be arranged. The new director at the museum, however, is much more open to such photo shoots and I wanted to make sure that I introduced myself. The Edmund Fitzgerald anniversary lighting was the perfect time to do it.

After some negotiations, I was able to arrange a special lighting of the lens after the public lighting was finished, allowing interior shots of the illuminated lens, among other shots.

The weather forecast for November 10th was constantly changing, with a storm predicted that would bring 4-8 inches of snow at some point that evening. Normally, hundreds of people gather on the beach for the event, but with Covid, that was down to just a couple dozen. At 4:30 p.m., the lens was turned on and began spinning and flashing its light over the lake. Blue hour made for some nice shots, but once it got darker, the cliff and all the surrounding landscape turned to black. The Fresnel lens is so bright that you can’t expose enough to capture the landscape without blowing out the light. With the heavy cloud cover, stars weren’t present either. The moon really needed to be up to help illuminate the landscape. That’s something that’s obviously out of anyone’s control.

At 7:00 p.m., the Fresnel lens was turned off and the public dispersed. At about the same time, the snow storm started to move in and the ground began to get covered. At 8:15 p.m., we turned the light back on, but turned off the rotating motor so the lens was stationary; the lighthouse is not an official aid to navigation, so this wasn’t an issue. During our time inside, I shot interior pictures of the lens, as well as the original clockwork mechanism that turns the lens. The snow was really coming down hard at that point and the beam of light shooting out from the lantern room was very impressive.

With about one hour of shooting time left, I made my way down the cliffs to shoot on the beach. Between the falling snow and atmosphere, the once-pitch-black landscape now was dramatically illuminated by the giant beam of light emanating from the lighthouse. In 20 years of shooting lighthouses at nighttime, this was certainly the most dramatic beam of light I had ever seen. With the lens stationary, it made capturing the beam very easy and produced some of my favorite night shots of all time.

At 10:00 p.m., it was all over and I carefully began my trip back home. In all, I only spent about 40 hours in Minnesota and managed to photograph five other lighthouses in the Duluth area, all while social distancing.

In 2021, I hope to arrange a weekend photo shoot at the Split Rock Lighthouse so a group can capture images of the 3rd order Fresnel lens in action. If you’re interested in photographing this amazing place with the lens turned on just for us, keep an eye out for the announcement and make sure you’re signed up for our newsletter.