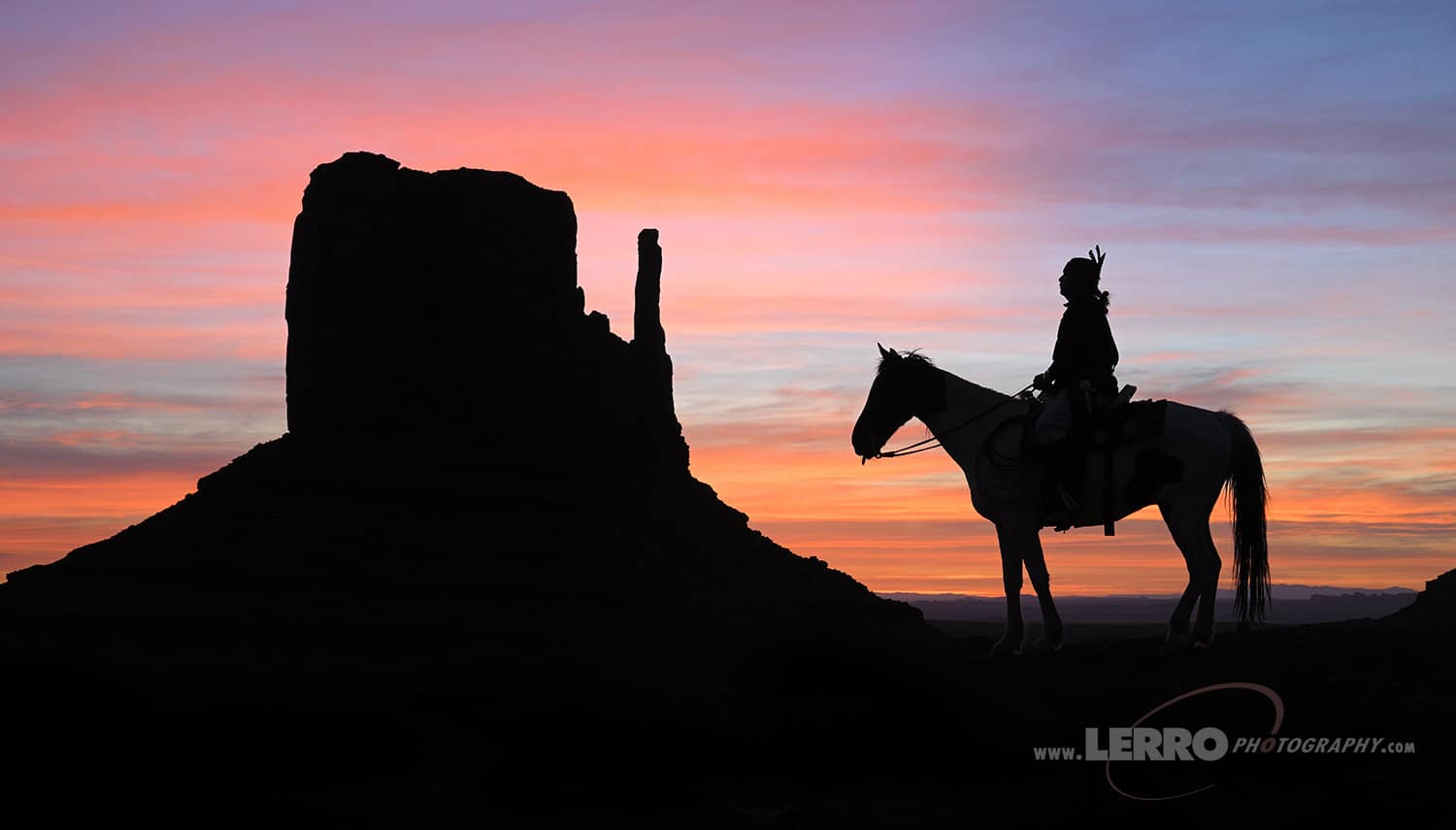 In May 2022, Lerro Photography sponsored two photography workshops at Monument Valley. The workshops were greatly anticipated by the photographers with the park having been closed since the spring of 2020 due to the ongoing pandemic.

One of the advantages of attending the workshop is that we were able to photograph locations within the park that the general public cannot go to without a Navajo guide. We also emphasized human interest photo opportunities of the Navajo culture, especially a particular family that lives within the park.

A special highlight of our workshop was that we were allowed to camp on private property and sleep in a hogan. A hogan is a traditional Navajo home constructed of wooden poles, tree bark, and mud. The hogan not only acted as a place to sleep and hang out between shots but was also a beautiful backdrop for our photos.

Something that always plays a role in landscape photography is the weather. Although the two workshops were intended to be identical, we had to make some variations to accommodate the changing forecast. Both workshops started with evening/sunset shots of the dunes around the Mittens. The dramatic side-lighting helped create countless shadows in the sand, plus it made the red rock formations glow against the blue sky. The wind was blowing the sand around which added some atmosphere to the scene.

The following morning, we woke up around 1:30 am to hike to and photograph the rising Milky Way above the Mittens. A few clouds were on the horizon, but we managed to get a few spectacular shots before the clouds got thicker. Around 5:00 am, the horizon started to glow, and we traveled to an overlook location where we photographed a Navajo horse rider at sunrise. The workshop groups could not have asked for a better scene, as both groups had an amazing sunrise. It was the perfect mix of clouds and color and having a great horse rider also helps. After sunrise, we returned to the hogan and got a few more shots of the horse and rider with the surrounding landscape.

We then took an extended and much-needed midday break to be well-rested for the sunset and night shots. The sunset provided us with great photo opportunities of the famous Forrest Gump panorama featuring the road leading toward the park. After a few more hours of rest, we traveled via tour jeep to the Totem Pole and dunes to photograph the Milky Way rising into the scene. I had scouted several locations earlier in the week so we knew where the best dunes would be. After a short hike, we set up our tripods and began shooting. We arranged a predetermined area where we could shoot so we wouldn’t get in each other’s way. As we shot our pictures, the Milky Way slowly drifted up and to the right, giving the photographers different options to walk around and incorporate the sky with the dunes.

After capturing some amazing night pictures, we stayed at the Totem Pole for sunrise. Sunrise did not disappoint as a few high-level clouds glowed in the sky.

In the afternoon, we set up photo scenes with the Navajo family. They were dressed in traditional Navajo clothing and demonstrated wool weaving, crushing grain with rocks, and setting hair. Portraits were also shot both outside and inside the hogan. During this time, the photographers learned how to use the natural light entering from the hogan’s top sun window and the side door. Using the natural light in addition to both light sources created different lighting effects on their face and bodies. The photographers also learned that small changes in posture can create different moods in their photos.

The weather would strike again with very high winds toward the end of each photo workshop, causing us to change our plans. The original plan for both groups was to take photos at the Hunts Mesa overlook; however, drifting sands covered the backroads needed to get there. Our final sunset was a bust as the winds were so strong that we were getting blasted by the sands. We were able to make up for the loss of the Hunts Mesa photos with each group getting additional photo opportunities in different areas of the park. For the first group, we enjoyed an extra night of Milky Way photography since the clouds cleared and the wind died down. The second group took a jeep tour deep into the backcountry so we could photograph several arches and other rock formations.

These workshops are not just about learning to take great photos; they are about exploring new places and friendships. I appreciated the camaraderie during the workshops, as with our downtime, we enjoyed a bonfire and time relaxing in the hogan. We also spent time swapping photography stories and learning the history of the area from our Navajo guide.

If you missed out on the workshops this year, don’t worry. Monument Valley is one of my favorite places to photograph and we plan on going back again next year.

Stay up to date with our newsletter for announcements.