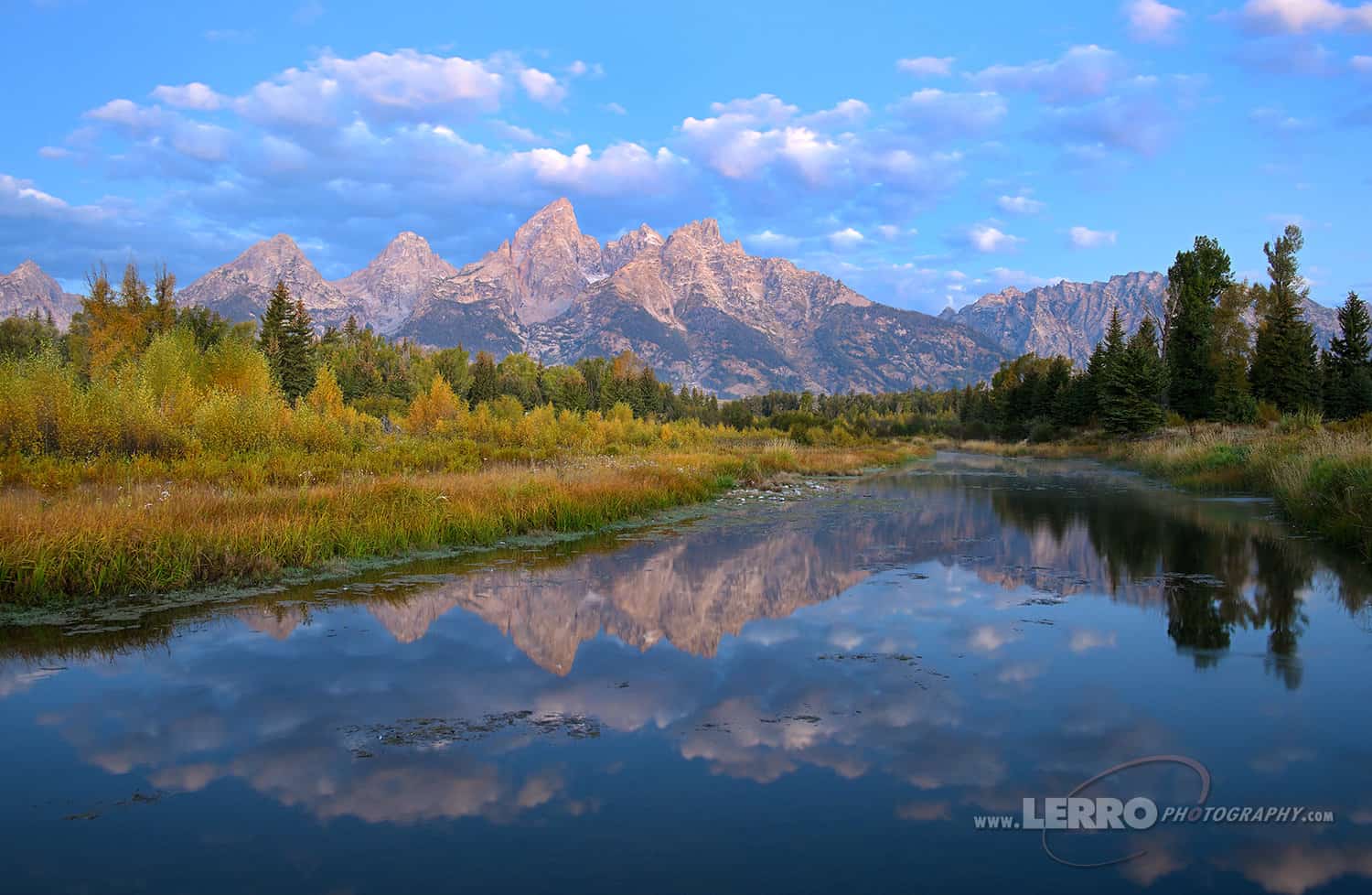 Grand Teton National Park is one of the United State’s premier National Parks and offers both spectacular landscapes and amazing wildlife opportunities. For our photo workshop, we planned our visit to coincide with the fall color. We also hoped to photograph the larger wildlife such as bears and Moose.

While I had been to Grand Teton several times in the past, I went out 3 days early in order to see where the fall colors were strongest as well as find out the recent wildlife patterns. Bison and moose tend to move around and then stay in certain areas for periods of time. After a day of driving around, it became apparent the bears and moose were pretty active but bison were nowhere to be found. On the 3 days of my scouting trip, I found a park ranger that recently saw a herd of bison on a small back country road. I quickly found the road and drove down it where I did find the herd. It was also apparent that the fall colors were going to be very late this year due to unusually warm and dry weather.

Our group met up Thursday afternoon at the visitor where we had a quick orientation and safety meeting. From there, we went to a location that overlooks a pond that filters into the Snake River. In just 2.5 hours, we managed to photograph 5 bears, 4 moose, and 3 elk. Not a bad way to start the photo workshop. During that time, the photographers learned different settings to help capture the motion of the animals as well as the scenery around them.

Over the next couple of days, we were able to find more wildlife to photograph including bears, elk, and a herd of bison. We also photograph horses that are kept at local ranches. The hidden bison heard made its way to the main road by the end of the week so we didn’t have to go back road exploring. In fact, the bison actually took over the road for about 30 minutes, which caused quite a traffic jam. We were able to photograph the herd for over 2 hours from the comfort and safety of our cars.

One of the other highlights of our photo workshop was the photographers learning how to photograph the Milky Way. One of our night locations was at the Moulton Barn in Mormon Row. There isn’t any ambient light there so they had to learn how to spot focus and compose an image in complete darkness. Light painting is not allowed in Grand Teton National Park so we had to be patient and wait for a passing car to illuminate our foreground. Luckily for us, several cars would pass by over the 60-90 minutes we were there.

As mentioned earlier, the fall color was late this year due to warm temperatures and lack of rain but we did manage to find a few spots where the color was decent. Those locations tended to be pretty scenic so we made sure to shoot at them when the lighting was good.

At the end of the photo workshop, the photographers came away with a very nice mix of landscape and wildlife images. We hope to go back to Grand Teton in the next year or two.