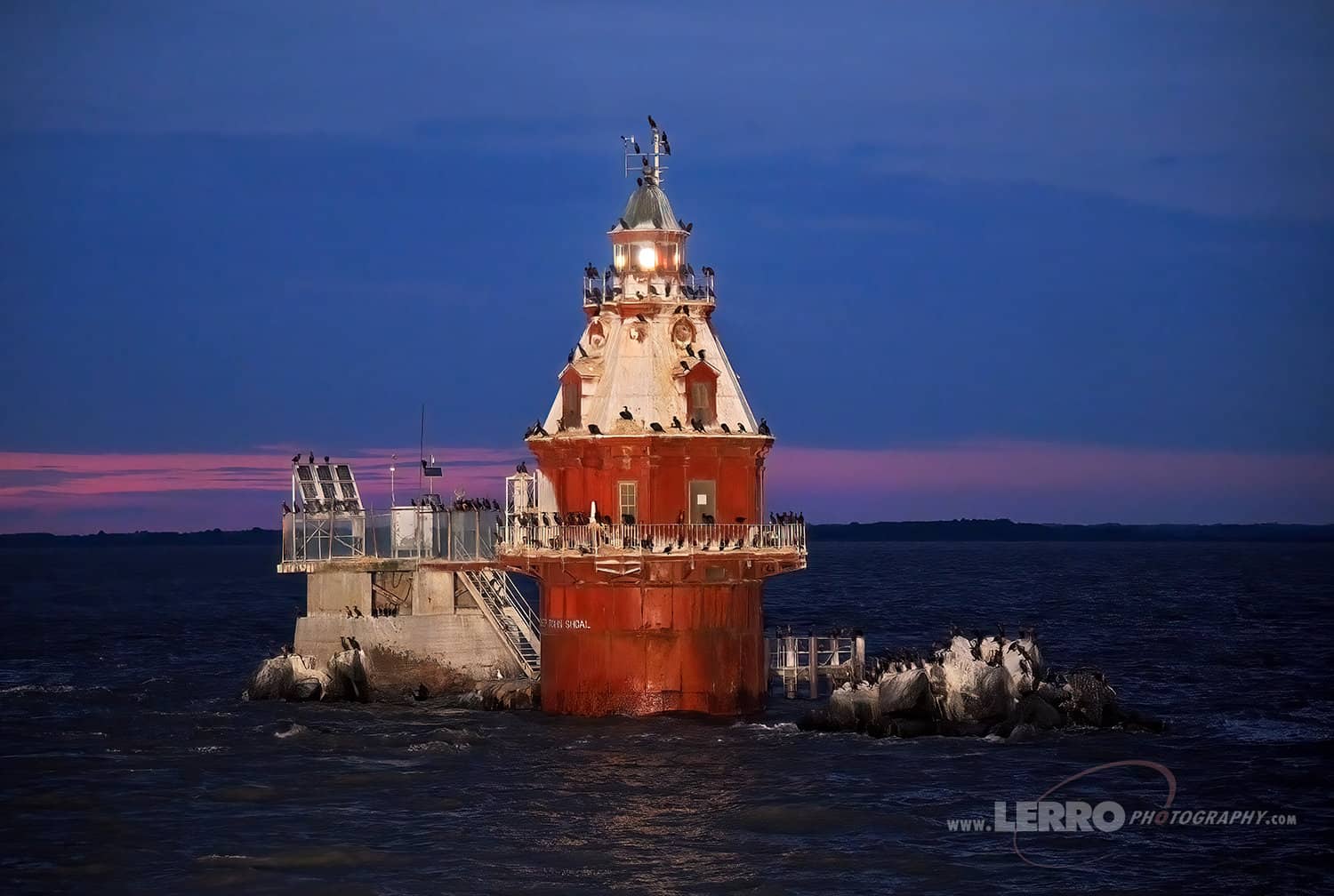 In August 2022, Lerro Photography chartered a large whale-watching boat so a group of photographers could view several lighthouses in Delaware Bay both day and night. We set the date one day before the full moon intending to photograph the moon just above the horizon at sunset. The plan was to depart Cape May and photograph all the bay lights from south to north during the day and then hit them again after sunset on our way back to Cape May. We mounted our large LED lights on the port side of the ship so we could illuminate the lighthouses while the near-full moon would light up the landscape and sky.

The boat we chartered, the Atlantis, is a 125-foot Gulf Craft with a capacity of 300 people. Since we only had 23 photographers, there was more than enough room for us to spread out and take pictures from either side of the boat.

On the day of the shoot, the weather forecast was calling for late evening thunderstorms so we had to make good time to dodge the rain. We got underway a little after 4:00 pm and made our first stop at Brandywine Shoal Lighthouse. Beautiful lighting and light clouds gave us great photo opportunities. We even got a bonus as the boat pulled away when the Cape May Lighthouse drifted into view in the distance behind Brandywine Shoal Light. Our next stop was Fourteen Foot Bank Light, the only lighthouse we visited in Delaware. As the boat circled the lighthouse, it gave photographers a variety of fully sunlit shots or backlighting with dramatic storm clouds in the distance.

By the time we made it to our third lighthouse, Miah Maull Shoal Light, the clouds started to move in. We made the best of the changing conditions and photographed the lighthouse silhouetted against the clouds. We then made quick stops at the ruins of the Cross Ledge Light and its modern replacement, Elbow of Cross Ledge Light.

Our final lighthouse before sunset was Ship John Shoal Lighthouse and we arrived as the storm clouds started to get closer. While we started to shoot, we routinely kept an eye on the radar and tracked the approaching storms. There were big gaps in the rain on the radar, giving us hope that we could shoot at least a few of the lighthouses at night.

As sunset occurred, the moon made a quick and surprising appearance through the clouds to the east. Our boat captain did a great job at keeping the moon behind the lighthouse for us while fighting the tide and increasing winds. After we were happy with our shots and hoping to beat the rain, we made our way as fast as we could back to Miah Maull Shoal Lighthouse. Unfortunately, Mother Nature had other plans and as we arrived, the skies opened up with heavy rain and lightning. Our boat had decks with roofs that sheltered the photographers from the rain, so we attempted to get some shots of the lighthouse but the wind was pushing rain in all directions. Unfortunately, the boat captain and I made the final decision that we had to end the trip early.

Despite the weather, it was a successful trip and we hope to schedule it again in 2023.