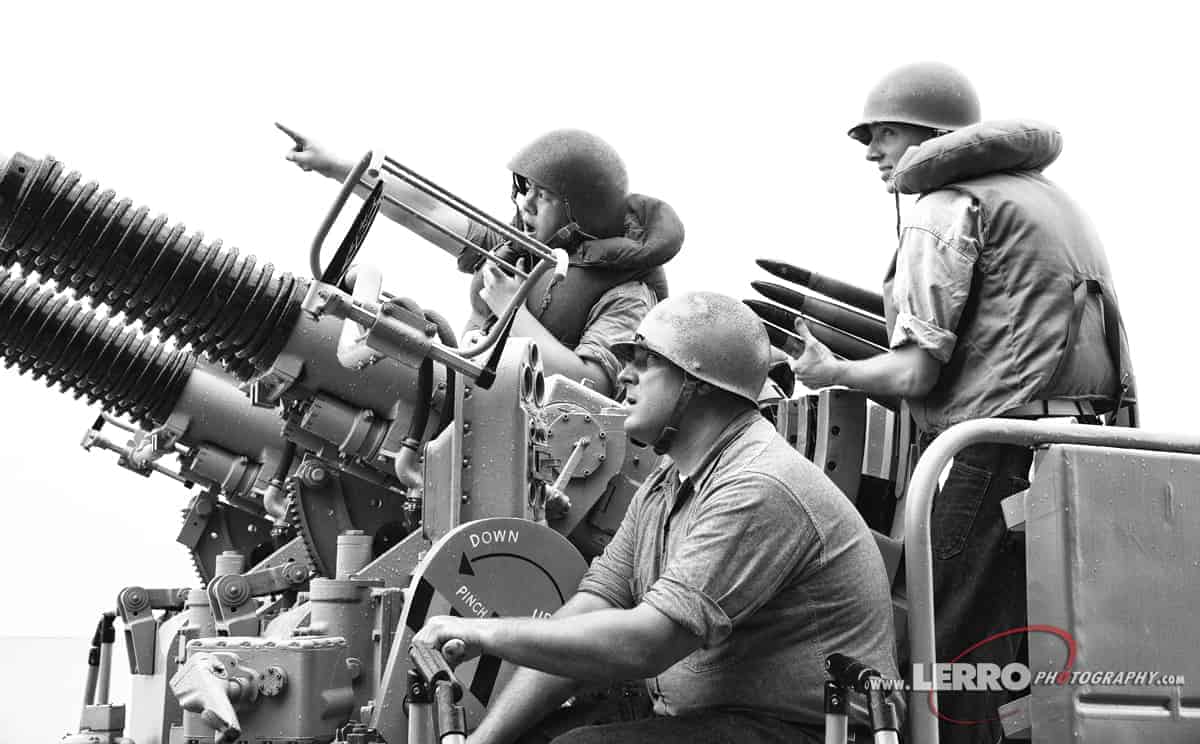 The USS New Jersey (BB-62) is an Iowa-class battleship that features 9 x 16 inch guns and is 887 feet long. She served in WWII, the Korean War, the Vietnam War and other engagements in the 1980s. In 1991, the New Jersey was decommissioned and became a museum in 2001.

Lerro Productions sponsored a WWII era reenactment photo shoot on the USS New Jersey in August 2018 and featured two separate shoots. The morning session was a classic pinup shoot and the afternoon shoot was a Navy crew shoot.

Our morning pinup shoot featured Jenny and Rosalyn and they posed in various locations around the ship including on top of turret 1, the bridge, broadway and the windlass room. The weather made shooting a little difficult at times as we had to run in and out during quick rain showers.

We had a last minute addition to our morning shoot in which Tatyana came with her Navy Wave uniforms.

The next location was the powder bag elevator room where our crew members moved the powder bags from the storage room on top the elevators. The real powder bags weighed close to 110 pounds each and it took 6 bags to fire just one projectile. For our shoot, there were two bag filed with air so they only weight a couple of pounds but the other bags in our shots were filled with sand so they weighed close to 110 pounds each.

Our third location was the plot room where all the of guidance information was entered into the primitive computer to help aim the guns. This room housed the Mark 8 Rangekeeper, Mark 41 Stable Vertical, Mk13 FC Radar controls and displays and Fire Control Switchboard.

The fourth location was the quad 40mm Bofor anti aircraft gun. During WWII, there were eighty of these guns mounted throughout the battleship but were removed after WWII because they were ineffective against jets. Recently the battleship reacquired a quad 40mm gun and mounted it back on the ship.

Our final shot was on top of Turret 1 where our reenactors posed for group shots and portraits.